Ariel Will Be Black In Disney Live Action Remake 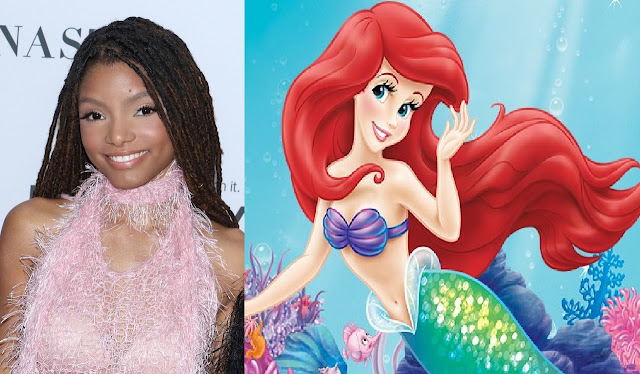 It has been stated by The Hollywood Reporter website that the upcoming live-action musical of The Little Mermaid directed by Rob Marshall has found its Ariel. Singer-actress Halle Bailey will  be stirring as The Little Mermaid herself. I know very little about her butt from what I've read she is a part of a R&B sister duo called Chloe X Halle.  it turns out that they are under a label that is head by Mega pop star Beyonce Knowles. I am very confident in the abilities of Bob Iger and the casting decisions for the majority of the remakes of Disney Classics lately. I cannot help but begin to Fan the flames of the inevitable controversies that are about to play this film.

Just like with Will Smith for Aladdin, which has gross close to nine hundred million dollars as of today, just like Maleficent there are fans who will attack this movie for the craziest of reasons. Here is a legitimate criticism that I already see coming. The hiring of a person whose background is music instead of acting for the most part. I always feel that going with proven Talent is the best route but we do not know the script and what the director is looking for so her Casting may be the perfect casting for this type of film. The other main issue that is inevitable will be the fact that we're going with a black actress instead of a Caucasian actress to portray Ariel. This also means that theoretically Ariel's father and all of her sisters will be black unless race and how mermaids are born in the world this director will create is not a major factor. A white or Caucasian merman may have African-American looking female mer-children.  Whatever the rules are it is still inevitable that moviegoers who love to troll and others who just do not like to see their beloved characters change in any way especially with race are about to cause a major uproar.

This is never fair and it has always proven to be futile in the end. for one, mermaids are not real and there is no written rule except from maybe a few supremist that a mermaid has always have to be depicted by a white person. But when we start to change a character who was portrayed originally one way, then the trolls of the internet will always accuse the maker of the film of politicizing or trying to follow trends. It's never possible in their minds that this actress and singer just simply crushed the audition.

If I were to play conspiracy theorist it would not be on changing the race of a character it would simply be about the casting decision of a young up and coming actress who is signed to a label that is owned by one of the most powerful women in all of entertainment, Beyonce Knowles. Beyonce is also playing Nala in the upcoming Lion King film. it may be a coincidence but I know it had to have played a tad bit of a factor. If anything the soundtrack should be amazing. you all the guaranteed original music from the star and her producer Beyonce. I feel that there are probably a lot of back deals happening in the making of this movie with the connection of The Lion King casting and the Sea Little Mermaid casting.

There were a lot of actors out who could have been picked and I am sure a lot of people will voice these opinions. The one thing I see from this casting is that they are going for a younger look and really portraying the fact that Ariel was just 15 or 16 years old in the movie. The major question that I have is how old will her love interest be in the film? You have a 16 year old mermaid marrying a, would look to be, 30 year old man in the cartoon. I'm sure the age difference won't be great but I'm hopeful that whoever will play the prince will be a teenager or portray a teenager. if Ariel is herself 18 in the movie. Other than that the only other controversial casting which to me is in a controversy a tall is Melissa McCarthy being chosen as Ursula the sea witch. I believe this was perfect casting. A lot of fans, a small minority, we're asking that a drag queen, or transgender person be the one to play Ursula since that's how the character was portrayed. I never saw her some of that way. Ursula reminded me of those loud and outspoken black church ladies that did a lot of gossiping every Sunday afternoon. She never came across to me as a cross-dressing man. But that's just my opinion. Let me know what your opinion is you can comment below or share with me @T3media is on all social media platforms.