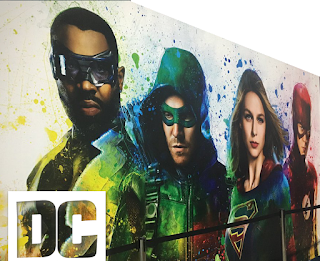 The most shocking thing in the premiere of the show Black Lightning was the willingness to set another new tone, far above the ones set by the tails end of the first season. This all comes from yet another all to real for television moment set up by the legendary actor Robert Townsend. Playing an old friend and lawyer, Napier Frank. In a discussion regarding how to act and present yourself to the school board, Jefferson makes a comment about black men sitting comfortably mocking hard working blacks out in the field. Frank responds, rapidly. I first assumed he would say "Are you calling me a house negro?" the more PC version of the title. No. It was time to draw a new line in the sand. Using the word nigger right out their took the show to a new level that many would not have expected.

A few would say it was not necessary. That would make it very necessary. So many shows are afraid. The only other one on the CW that I would kind of sort of expect it to happen, maybe, would be Arrow. The funniest thing about the moment, for me (as a black man), is that the second it was said I literally stated out loud "Well I'm guessing this means Supergirl won't be guest appearing on Black Lightning anytime soon. Realistically, the only thing I can see happening first a visit from Jimmy Olsen to have another one of those "Sometimes they'll only see me as a threat" episodes. This may clear the way for a possible Supergirl cameo but in reality, even seeing a black version of Jimmy would still feel out of place.

Maybe Sisco? His dark past and delivery can easily be made to fit into place with the tone of Blacklightling. Sisco and Jennifer would be a very comical pairing. Then again,
no.

The only thing now that makes sense is a cameo by David Ramsey as John Diggle. After the gauntlet has been drawn, this would be a winning cameo that can bring Black Lighting into the team. To me, its the only logical anchor to the rest of the shows. Wild Dog and Mr. Terrific could also make a splash. Just my two cents.