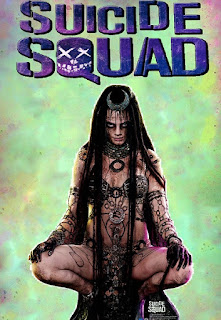 I enjoyed the DC Cinematic Universe in this order:

The villain was the weakest point of this film. I loved Enchantress, except for the dance scene, her brother on the other hand was a very weak villain. Almost no point to have him until the very end of the film. I wish they would have focused more on smaller missions to have more moments with the Squad to grow as a team.

I felt that the pasting was all over the place. The music unsed in the film was offputing though I loved the songs. It was weird.
The Joker was great but there wasn't enough of him for my taste. Harley was pitch perfect and as was Diablo and Deadshot. It just felt as though the movie as a whole was struggling to find its identity. Comedy/Action
Action/Comedy
Dramedy/Action

It kept going back and forth. Also the best jokes were in the trailer. It would've been best for them to hold back. Focus on the action and saved one punch line for the debut.

A great moment was The Flash cameo. But even then it was just a mind boggele. Is this film set before Justice League why does The Flash have his suite? I'm sure they'll later tell us that the event is set in the middle of Suicide Squad, which wouldn't make sense because at the lease Flash would have and probably should have helped in the end.