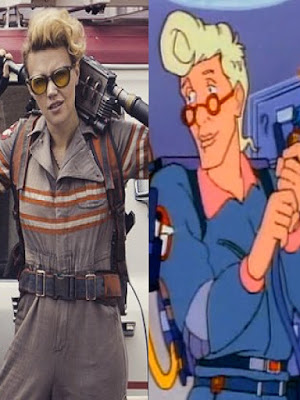 I believe that Sony missed a better opportunity to reboot the correct franchise. I never watched the cartoon Ghostbusters Extreme but I saw enough to know that it would have been best to continue the movies with this concept. With the upcoming reboot of Ghostbusters a lot of fans are up in arms about the direction the movie is going. Most think an all female cast is to blame but with them being as funny as they are in their own right.

I see it more to the failure of the marketing. Having a mixed group of youngsters as you got from the cartoon was the best course of action.  I'm looking forward to the movie but I'm still keeping my expectations low.

I came across a picture of Egon Spangler from The Real Ghostbusters cartoon in the 80's and damn if I didn't notice a similarity of Kate McKinnon's character and Egon. Its almost identical. I think this is the direction Sony should have gone. If Sony were to reboot the cartoon and it failed then no harm to the original. You call it a reboot of the original film even thought its a total remake, it still cast a shadow if it fails.
at July 04, 2016 No comments:
Email ThisBlogThis!Share to TwitterShare to FacebookShare to Pinterest
Labels: Cartoon, Ghostubuster, Movie Review, Reboot, remake, Sony, The Real Ghostbusters 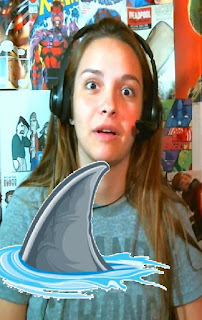 Morgan and Jasmine of Talking Through The Medias talks about their experience of The Shallows.

They speak of the main character going to a secret beach in Australia but its suppose to be Galveston. These girls being from Texas know that its definitely not what Galveston looks like. Jasmine says "it kept her on the edge of her seat, and gave her goose bumps." She's a fan of gory movies but Morgan was wondering why the main character could talk to animals and wore too much jewelry.

But they do recommend the  movie, it will have you covering your eyes a lot due to a lot of bloody scenes. You'll have fun getting bit by the shark.