Pilot Episode of Talking Through The Movies Now On YouTube

Mr. Sean Malloy and Christopher Fagan talk over the movies. Running over time to discuss things like the new Batman V Superman trailer. The leaked footage of Suicide Squad to Weird Science.

The pilot did run about 45 minutes longer than I'd want it to but it was fun to talk with Sean about these things. I never have a dull moment talking through the movies with him and I'm glad that he's officially apart of the team after all these years of idea after idea of getting nothing done.

This is the first step in a new direction that I hope will keep us on the path to a great future for Talking Through The Movies.

Thank you for a great pilot episode, Mr. Malloy.

Video may not be suitable for all viewers. 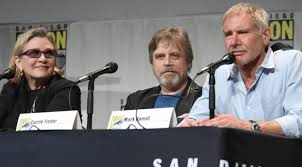 Harrison Ford made an appearance at this years Comic Con in San Diego.

that his character will die, making the ultimate sacrifies to leave the show

the hero. One interview he gave was to Screen Slam, posted on their YouTube channel.

He talked about having a great time filming The Force Awakens, refering to his

costars as a fantastic cast and that he had a great time doing the movie. He

goes on about the great script and the ambition of J.J. Abrams. He said that he

was delighted and proud to have been able to represent the film for the fans.

He then reveals that he acted as a mentor to the new cast, saying that life as

they knew it is over. He recalled a conversation with Daisy Ridley. Telling her

and that she will get use to it. Then she'll wonder what happened when you turn

when all everyone in the world and in this business is doing is looking at you.

This was advise that I'm sure she took to heart.

the crowd gave him a standing ovation. He said it felt great after all these years

of being away from Star Wars to return.

As seen on the Associated Press channel below.