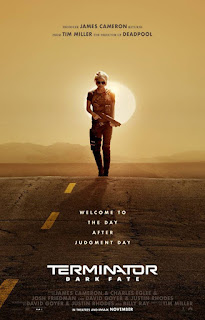 The first thing that came to mind as I watched this trailer was my curiosity and interest about the Grace character played by Mackenzie Davis. From what I can tell she has gone through an intense trailing routine and is in fantastic shape. Seeing a female protector reminds me of the Terminator series and from what I've seen it looks like she will be a great fit. Her expressions, her physical performances and intensity was gripping. The other thing about this cast that has me buzzing out loud is from Gabriel Luna. The only thing I've been exposed to is his performance on The Agents Of S.H.I.E.L.D. as the MCU Ghost Rider. To see him as a terminator, something like the T-1000 from Terminator 2. Everything I saw from him, the look and the mannerisms were pure perfection. I can tell he has put a lot of hard work in the worlds most persistent cyber stalker from the future.

The parts that I'm still a bit confused about is the red conning of the past films after T2. Here are a few things I'm thinking will need to be clarified. The new mission to have a protector save a new girl. The original John Connor played by Jude Collie is casted so who is the target? When the Grace character said "I am human" are we dealing with a robot in denial like we got on Genysis? One of my subscribers commented that Arnold will be the human the T100 was modeled after. Why would they even need him? Why does Sky-Net need him?

The last thing that came to my attention was that the thrilling theme song from the other films was not used at all. I did not know how much I would miss it until it became obvious that it was not even used. This is the biggest fail on a short list of criticism. This trailer did its job in building my interest but how could they not use that iconic song. There is no fate but what we make for ourselves. Is this the new standard of terminator teams? My hope is that there will be a continuous course correcting that will bring this franchise back to the action/horror mountain top that it is meant for.

Will there be an "I'll be back" or "Get Out" moment? There better be.