Queen and Slim is a film staring Daniel Kaluuy and Jodie Turner-Smith, written by Lena Waithe about a black couple on their first date who get pulled over by a cop and having the situation turning from routine to nightmare causing the couple to have to kill the police officer in self defense. Feeling that they are in a no win situation and that no one would believe their side of the story, they run away. Throughout the movie I asked my self many questions that were also asked in the film. When it came to the moment of the traffic stop I felt the most uncomfortable. The movie did a great job capturing the awkwardness of the date and the tense feelings being pulled over by a cop as well as the feeling of pressure to stand up for you rights and walk the line of trying not to escalate the situation.

The best part of the movie was seeing two people who seemed to not have much in common find love and strength in a world that both praised and hated them. Queen, at first seemed like a cold and rough around the edges person who was fed up with being disappointed. Slim, came off to much of a push over that was too willing to let bad things happen because he was too fearful to speak his mind. Throughout the journey both characters became exactly what they needed to be for themselves and for each other. This is one of those films where I don't know what I would have done in that situation. 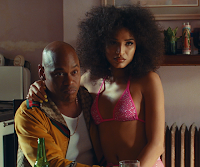 To me, the best performance came from all of the co-stars in this film. The people that help Queen and Slim along the way. Bokeem Woodbine as Uncle Earl along with Indya Moore were some of the most entertaining yet heart felt moments. By the time of me writing this report this film is currently sitting at 100% on Rotten Tomatoes. I give my reasons why I would not give this movie a perfect score, mainly because there were some decisions by the writing or direction of this film that I deemed unrealistic or done to make a point that would not ring true in the real world. This film is not going to change the hearts and minds of people who go in with their hearts and minds already made up on this type of situation. If you’re pro-cops and feel that people get themselves in trouble when they “disobey” officers then you’ll probably feel that way about Queen and Slim going out. If you feel that cops are not perfect and that there are bad actors in any profession, racism still exists and a cop can be racist like anyone else is capable, then you’ll leave feeling the same way. I am a black man in American and I know what its like to have a tense situation get worse and worse no matter how progressive or woke we think we’ve become. Films like this are reminder of what is really going on in some parts of the world and what some people will not believe ever happens to others because it doesn’t happen to them. Films like this, when they are done right, as this one was are always necessary.

I recommend people see it because its gives the right message at the right time. Ironically its also a great date movie. Despite all of the things that goes wrong with Queen and Slim the love that grows between them is heartfelt. The people that both Queen and Slim become the further and further they go makes the viewer root for the love between them to blossom just as loud as you would root for to escape the dangers that are all around them. I took away that the chances of their escape were intertwined with their chances of them accepting each. The thing to figure out is can they have it all or is one sacrificed for the other.