Dead To Me Is Simply Thrillarious: My Review And Speculations 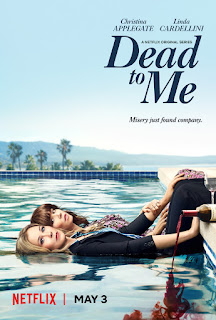 Usually when a show is even slightly predictable I lose interest in finishing. It becomes clear that it will take an extremely interesting cast with near perfect acting ability to keep me glued. I saw the trailers to Dead to Me and still feel that Netflix is doing itself a disservice with the marketing team developing trailers that give away the entire plots to there films and series. The same thing happened again with this series. I predicted the reasons behind the characters Judy Hale and Jen Harding fates being intertwined from the trailers. It was a guess but the way the stories were setting up, it was an educated guess that turned out to be correct.

A widow with anger issues meets a free spirited new friend that keeps insisting to plant herself into each others lives. She (Judy) seems grief stricken and riddled with guilt. Not just because of the her stories of losing a loved one to find similarities to the widow Jen, but from the first time she is on the screen you can see pain and guilt in her eyes. This was brilliantly displayed Linda Cardellini.

I feel that the mood was set from the very beginning. I personally have dubbed this series simply Thrillarious. Though predictable in a lot of moments, the journey is the prize. The execution by the talent kept me glued to my seat. Took me two days to binge but that was only because I started it late and finished it early the next day. This series is funny and devastating enough to really perk you up and beat you up at the same time. I can not remember the last time I had this much fun.

My thoughts for the next season.
Detective Nick Prager will become the main issue to deal with. He has to feel betrayed used and the thrill of getting his mojo back by taking down these two women could make his career or spell his doom. Maybe he will join the team and have another chance at love with Judy but will he ever want to? I wouldn't but I'm still a sucker for love so who knows.

We will definitely see the actor playing Jen's dead husband in action. Flashbacks are a guarantee, we'll have to reconcile the multiple lies and affairs.

The ultimate question, will Judy and Jen try to cover up what they've done in the end or use the neighbors tip about guns/invitations and just continue their strange hate bond friendship over the "you killed by husband, I killed your boyfriend" tether.