NBC Should Give Tamron Hall Her Show, A Raise & An Apology Because Of Megan Kelly 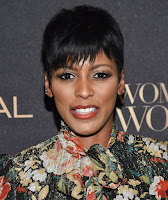 I have no sympathy for Megan Kelly right now. As you will see on my podcast and Facebook Live posts on the subject. This was the moment in Kelly's episode after she made her remarks on blackface and the people she was okay with doing it on Halloween, where she had already forgave herself. In a world where you had forty plus years of knowing the historic relevance on this subject how how it has hurt and killed so many people in our country. Megan Kelly used her audience, especially the women of color sitting in the crowd as a shield on her credibility, her integrity and her truth. She forgot where she was and reminded us of the person she has always been since before Fox. This woman was able to get a huge contract on NBC taking away beloved Tamron Hall.

I believe Tamron Hall is owed an apology. She should be brought back for the exact same dollar amount that Kelly given, if not more Megan Kelly was never received well by the audience of NBC and MSNBC and her ratings showed it. The fact that it took Megan Kelly having a real moment on the network is more telling on the network. You get what you over pay for. I don't feel that Megan Kelly should be fired for what she said because its arguable that she was hired on the same foundation. This is the woman who argued that black men can not be Santa Clause. Her telling you that she grew up in a community that felt that as long as it is done "Respectfully" blackface was okay. She told a truth. A truth that lives in the bubbled community and upbringing she experienced. NBC knew of this before hiring her so why fire her?

Ultimately its because of the backlash, ratings and the comments. Not particularly in that order but over all it was the perfect straw to break the back. It seems that fans of NBC only had to wait a very short while to get the end result they knew was inevitable. I call for a complete reversal on the issue and implore NBC humble themselves and give Tamron her show back and issue an apology for creating an obvious hostile work environment.

I don't know if Hall would even return, few people have, but if there was ever a moment of a triumphant return that would be an obvious rating boost, its here and now. Megan Kelly forgave herself before her apology. That was also clear. She didn't see the big deal until the outrage threatened her big deal with the network. How do you see something one way for your whole life then take a little flack and in less than twenty four hours completely understand all of a sudden as if the statement of how it was not a big deal in the past suddenly wasn't always a complete fantasy. The truth is, it was alway a major damn deal. To the country, to the people of color it was aimed at hurting and if you feel that pretending to be a black person is a game then let the cops question you for walking on the side walk to your house and treat you like a criminal. Go to a job interview where you're the most qualified and not get the job for "unknown reason". Let your vote be suppressed and have white men, like Megan, constantly call the police on you for doing normal things and tell me then if its just fun and games.

Its easy to not see it as a big deal when you will gladly wash it off at the end of the day even if you did experience those things when you put the color on your skin. The feeling you must have knowing that its just one night and will wash off must be comforting but there are people in the world who will die black by hateful acts only because they were born black. That is not to be joked about for your entertainment. if you had a career of saying the things black people have been complaining about is not a big deal and then want to give yourself a controlled and self serving life lesson at another network who's team, sponsors and audience won't tolerate the rhetoric then your insta-apology is nothing more than just damage control and more insulting than the idiotic statement made the day before. I'm more offended by the apology. At least you weren't perpetrating a fraud. 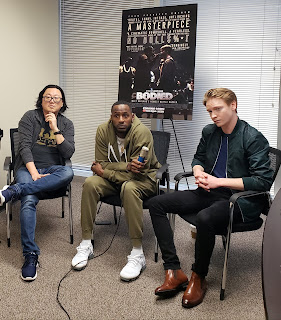 The director/writer of the movie Bodied, Joseph Kahn came back home to Houston Tx to talk about his work on the film and what it all means. He is accompanied by the two leads in his film Calum Worthy and Jackie Long. Review of the film will be released November 1st after the embargo is lifted.

Bodied is a Roast

Coming back to Houston

Kahn: It is always a pleasure to come back home. Number one i have a house here. This is where I started. I love meeting houstonians, we are a very different city. I feel like we have a lot less anger in Houston than other places. Other places have a lot of stuff to work out. There is a sort of base level civility that's in Houston that i feel that the rest of the country doesn't have. Its a special place.

With a lot of different music and moves how did you integrate yourself in this movie?

Worthy: Well the hardest part as the artist was learning how to rap. I had never rapped before. Joseph reminds me, sometimes, that I was the worse rapper to read for this role. So I went to rap school and trained by the greatest battle rappers in the world. In terms of the multicultural aspect, it was wonderful. It was really fun. Battle rapping is inherently very multicultural which makes this very special. It didn't matter where you came from, what your history was, we all connected from the artform perspective.

Long: The most interesting part was the dialog. Its telling a story in the battle raps. So you have to pay attention and listen to whats going on, cause if you miss the littlest thing you can miss a whole fun part.

Kahn: Here's the big thing. Its a multicultoral movie but its not a kumbyya movie. The world today is very tribal. We have factions of people arguing with each other. On social media peopple are arguing with each other. The dialog has changed in the last two or three years. The fortuitest thing about Bodied when we constructed it is its about that dioalog. its one thing when we all agree but what happens when we disagree. You might be offended by jokes but then your laughing at the expense at someone else, its a battle rap. I sucker punch you, I take you places that you won't expect it to go.

How Should Rappers handle none black rap fans using the N word.

Long: I grew up with that word. Being a black person that word will be around us forever. If you have the power to have your fans never say it then you've done your job. But I do not have a problem with my white & mexican friends saying nigga to me. At the end of the day its a word. There is so much going on in the world. I've been hearing it all my life and its never going to change. I could be talking to a friend on the phone and he could say "iight then, my nigga" its so natural now that it will slip out.

Do you think Hip Hop has taken blame for the popularity of the word?

Long: For sure Hip Hop. I would blame hip hop because you gotta think. NWA what did it stand for? Niggas with attitude. You hear it from females and male. Rap is always going to be accepted and I don't care what generation you're in, you're going to hear nigga. So it is what it is and rap is to blame.

Once our interview wrapped Sean asked one final question unrelated to the movie Bodied but was curious enough to ask and generate a response. If you could remake any movie which would you do?

These were three very interesting answers.