Sweaty nerds of the galaxy are you ready for more secrets regarding the latest edition of your Holy Trilogy that will make you Wookie in your pants?

We don't need to tell you again that speculation has been swirling around the internets pumping your blood clean of any of those stupid midichlorian. Stories like Lupita Nyong'o being born to play Asajj Ventress. Well as the story goes her fresh cut has been getting lower and lower to a bald fade. As we all know, this Academy Award Winner has been signed on and probably duel sabor trailing with Hamill (Luke Skywalker) Thursday's to Tuesday. Nyong'o brings a beauty to this Galaxy far far away that only would be enhanced with heavy make up and a chance to go rogue by playing one of the most ruthless Sith's since Maul. You'll defiantly want to keep refreshing imdb to see when the rumors turn to pure unadulterated fact or maybe another character who could just as well be a Jedi who may have a slight resemblance to Ventress only because the woman who's playing her just so happens to be a similar body type, coincidentally speaking. Or she could be Ventress, who knows. Keep clicking refresh. 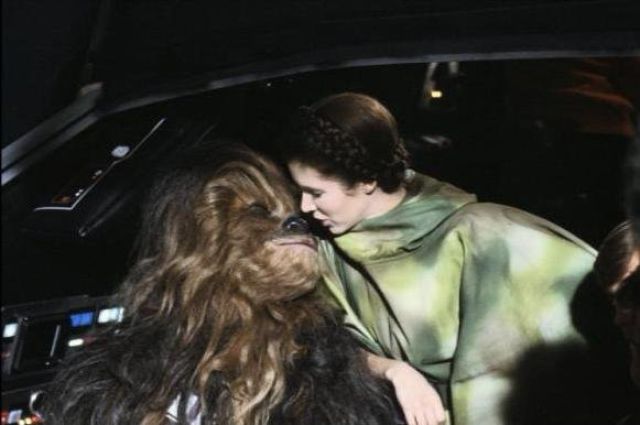 Harrison Ford demands that Hon Solo dies. Everyone feels that this is inevitable either from a Milenium Falcon crash landing, the son of Greedo seeks revenge or the beef between Chewie and Han gets real. There have been many storie
s that suggest that the lovable but deadly Chewbaca once got drunk at that bar that plays the same music over and over again. On the 1,988th replay of the hit single Chewie built up the courage to tell Leia how he really feels, grabbing her inappropriately and causing the Princess to channel suppressed Force powers pushing the Wookie across the bar. J.J. Abram's is still considering the Greedo angle.

Moving on to the big new of the new direction that is J.J. Abrams, its been posted some where on the internet, that J.J. has become obsess with Mark Hamill. Once the YouTube video of him resisting Star Wars dialogue as told by The Joker, Abrams rewrote the script so that Hamill will now have to give the performance of a Jedi Master Luke Skywalker, who is more powerful and just as wise as Obi Wan Kenobi but who speaks like the Clown Prince of Crime. Some people say that would be a good thing. No really people have said that.

Listen, I'm sure by now you've figured out where this little story is going. None of what I've written, especially in the last few paragraphs are anywhere near the truth. We at T.T.T.M. are not in the rumor business. I'll not join the ranks of crazies who just want to put out any nonsense rumor just to get a click. I'm a John Campea Guy. Yes, I'll fan fiction write, and I'll ask the "What If's" and sometimes I'll be right 98% of the time but only the 1% of it will go into print and even then you'll always know that I'm just, say it with me SPECULATING. I won't ever pass off rumors. If I want to have a little fun playing the what if game I will but lets try to relax as fans.

We're too involved in these worlds to the point where we're killing the romance in the theater by diluting the magic by dissecting every piece of leaked footage that comes our way. "What's that? A door that says Gotham Bank? What does this mean about the upcoming movies?" Well it means that at some point of the Batman V Superman: Dawn of Justice movie, there will be a scene with a bank in it. Either in the background or maybe Wayne or Luther will go check their safety deposit box to go roll around in Kryptonite found months after the events in Man of Steel. Or maybe their debit card will get stolen and Bruce or Lex might have to ask for a replacement. I don't know but I bet they won't have to wait long for the new card to come in the mail. You see what I did there? I just made some stuff up that could be in the movie or might not be but we'll find out soon enough. Who care about the rumors. The stuff that get released officially are way better and the cameras are shaky. Let all find the patients to let the people make their movie and hope it won't suck and that Gadot knocks it out the park. If it does suck and its all her fault I'll release the hounds.

Back to Star Wars, lets let the nice Jedi and Sith get back to business and make sure we wipe away the bad smell of Jar Jar and get this party started right. Okay guys? We're here at the bar! Play that same song. 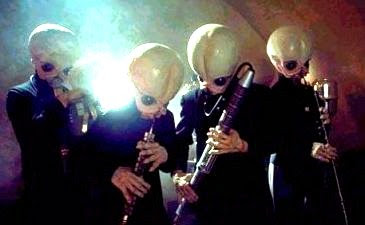