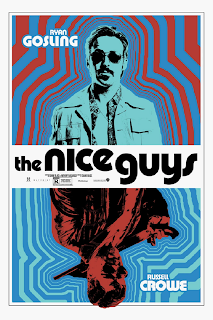 Its set in seventies LA and it's lots of fun. It's made by Shane Black so it's pretty much along the line of Kiss Kiss Bang Bang. But I would say better, there's quite a few elements of Big Lebowski. As you may know I f****** love. God I'm all over the f-bombs today; you can tell I'm passionate. This is definitely my favorite Russell Crowe play. I think the last thing I saw him do was lame is so I'm glad he's not singing. He plays the silent strong guy really well. Ryan Gosling who is really showing that he's actually good at physical comedy which is not what you'd expect necessarily from him. He's romantic he's clumsy he's crazy. He does have most of the good lines. Just generally, on form it's a mismatched buddy comedy. It's just good performances by both. The whole film really involves around that central relationship. The surprising note as well is Ryan Gosling's daughter who is kind of like the penny from Inspector Gadget she's pretty savvy smart and sometimes and this type of film you expect a young girl to be a burden but probably being a damsel but she's owning this s***. She's getting into the center of it and being a strong female character. The plot is really good as well there's actually a who's done it and the narrative flows.

It's crazy in places and unusual characters along the way but I definitely feel I will watch it again to get more out of it there's definitely stuff I missed the first time around but the thing I didn't miss is that it's f****** spot-on like a unicorn! F-bomb number 3. But it is for unicorns so it's totally worth it.

you want some quotes? You want to hear some of the funny stuff that they're saying? Here we go. "Marriage is buying a house for someone you hate".
"You know who else was just following orders? Hitler!"
Boom!

I do enjoy it. I do enjoy the location. Just generally generally enjoyed it. I think it's potentially my new favorite family year. It was a good link, it sets up for a sequel and I kind of hope it does. So yes, go see it brilliant film I couldn't recommend it stronger. Modern cult classic. But what did you guys think did you like it as much as I did who is your favorite character, Ryan Gosling or Russell Crowe? Let me know in the comments and don't forget click the Subscribe button on my YouTube channel and also talking through the media.