Don't Breathe Makes A Second Appearance At Number One

With Don’t Breathe hitting number one two weeks in a row, what does this mean for the horror genre? 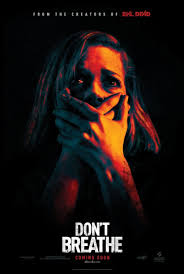 This has been a great year for horror films. Not since the late 80’s and early 90’s with the Revolution of the campy slasher flix have we seen this type of motivation. The horror genre is not nor has it ever died. This is not a resurrection but yet a energization. Now horror is being taken more seriously by producers and quality of writing and direction have amped up. Not that we have to have to self Oscar actors in these films, yet we are going low budget, great execution and pulling in an outstanding haul of gross profits. The audience over all is happy. In the months before we reach this year’s Halloween people are enjoying themselves in the genre.

The Conjuring 2, with a forty million dollar budget was able to bring in over three hundred million dollars worldwide. The film is set for another spin off and sequel. We’ve found a new franchise to replace Paranormal Activity. Lights Out was impactful in many ways. The main way was that it was based on a video short that was adapted to an original screen play from the same developers. On a budget of less than five million dollars, Lights Out grossed over a hundred and twenty.

Upcoming films like When the Bough Breaks and Boo! A Madea Halloween, set to attract a different type of audience, its apparent, to me, that horror is all the rave this year and for the years to come. I myself will be checking out a suggested film by the Queen of Collider, Perry Nemiroff called Nina Forever. A film about a man who loses his girlfriend, that then sees her reappear in his bed every time he tries to become intimate with his new girlfriend.

The Blair Witch is returning to theaters and expected to also hit hard with audiences. This is particularly a great time to be a horror film fan. Sit back enjoy the scares and prepare yourself for more.
at September 04, 2016 No comments:
Email ThisBlogThis!Share to TwitterShare to FacebookShare to Pinterest
Labels: 3 out of 5, Box Office, Don't Breathe, Horror, Lights Out, Madea, The Conjuring 2, thriller
Newer Posts Older Posts Home
Subscribe to: Posts (Atom)
Follow @t3medias