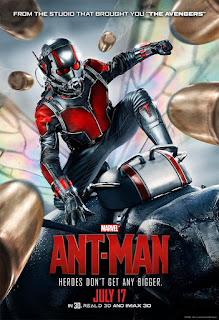 Marvel Studios just sent a link to the new Ant Man poster released on their Twitter page. This is one of the best Marvel superhero posters I've seen in a while. I love how larger-than-life man appears, when in reality tease super small. the hero action pose delivers and is one more little subtle tea that is getting me ever more excited for this movies release. the only bit of criticism is the tag at the top, from the creators of the Avengers. I understand that Ant Man isn't as popular as a lot of Marvel characters, even among comic book readers. At this point after the success of guardians of the galaxy, Marvel Studios has become almost on the level as a Pixar. does not have a when record like Pixar, they've had a few flops but the consistency of quality more than makes up for it and to me puts them in the trusted blue-chip bracket. just being a marvel film is enough for me to hand over my money. I'm a go see this movie in 3d. I am super curious to what will happen when this little man starts jumping around in 3d action.
at May 28, 2015 No comments:
Email ThisBlogThis!Share to TwitterShare to FacebookShare to Pinterest
Labels: action, comic book, Comic book movie, guardians of the galaxy, July, Kevin Fiege, large, Marvel, Paul Rudd, poster, reaction, Review, small, summer blockbuster, Twitter

Through The Trailers: The End of the Tour Review 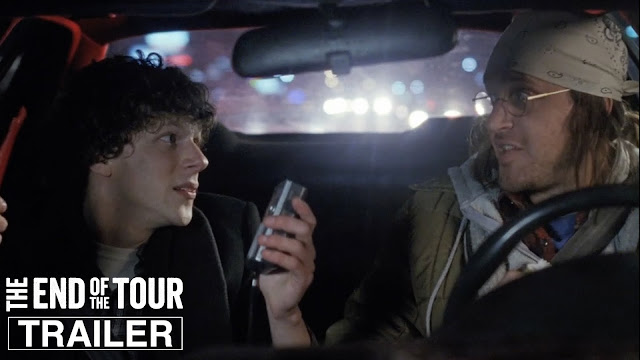 The End of the Tour is a biographical drama directed byJames Ponsoldt and written by Donald Margulies, based on David Lipsky's 2010 book Although of Course You End Up Becoming Yourself. It stars Jason Segel and Jesse Eisenberg, and is scheduled for release on July 31, 2015.

The David Foster Wallace Literary Estate has not endorsed the film stating that Wallace would have never agreed to any filmic portrayal.

So I decided that I'm not taking my blogging serious enough.

So I'm going to challenge myself and start watching trailers on my phone when I have free time or down time and blogging immediately after I see new trailers. so thanks to Android I should be able to keep myself busy and get my thoughts out a lot faster. After watching this trailer I feel a little conflicted. I can already see that critics are already raving about the performances but just simply going by the trailer I get a vibe that it's a prequel to the social network.

Eisenberg still hasn't convinced me that he can break the chains from his performance on the social network. I'm hoping once he's portrayed Lex Luthor or that would have changed. but based on what I've seen from this trailer he still has not change my mind as of yet. That's not to say that this film won't be great. from what I can tell it has a lot of great messages and there's obvious chemistry between Segel and Heisenberg but I I am going to have to wait to see the movie in its entirety before I can tell you whether or not I even liked the trailer. it didn't make me very enthusiastic nor did it for me so I'm going to be a clean slate and just give the movie a chance for the sake of giving a movie a chance. here's hoping that I'll be knocked out by how great this movie will impact.