Is Hotel Artemis A Cult Classic, A Franchise Or Neither 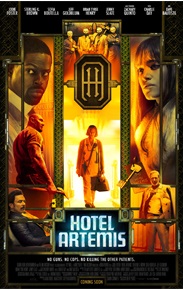 Let's check into the Hotel Artemis. I just saw this movie it stars Jodie Foster, Dave Bautista, Sofia Boutella and Sterling K. Brown just to name a few. It was asked on Silver Screen Analysis "Does An Ensemble Cast Equal Success?" To answer the question, I would say, it probably use to. Now a days with so many movies coming out and people being more careful with what they spend money on, the risk are higher than ever to make a profit on anything. So lets roll the dice. Brown plays, Waikiki, professional criminal who has problems in his personal life. he's always being held back by his little brother played by Brian Terry Henry and they get themselves into a little bit of trouble when they rob a bank. Now all around them in the city from the begin of the film, the tone is setting that there are riots in the streets. Citizens are angry at the rich and all hell is breaking lose. Logic tells Waikiki to use the chaos to make money. A smart plan that goes horribly wrong faster than it starts. The year is 2028 there is also a water shortage. Tone set. 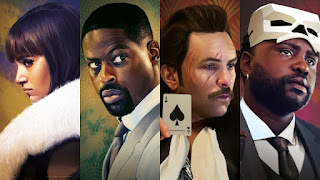 What do you do when all hell breaks lose, you're a wanted criminal and now you need medical attention? Who you gonna call? Jodie Foster! Hotel Artem it's a place where criminals can go to get patched up no questions asked, no cops, don't break the rules, pay your membership and things will go smooth for you kind of place. Jodie Foster plays Jean Thomas, referred to as the nurse by Dave Batista aka Everest. Throughout the film you can see their is obviously a mothering/mentor ship between these two characters. But I always wondered if maybe Batista's character ever became attracted to her or fell in love with her at one point. She did get him off the streets and they seem to be cooped up in this situation locking out most contact with the outside world. Hard to believe the thought never crossed his mind. The movie does not dive into this but my mind wondered. Charlie Acapulco, the arms dealer an asshole. Of course he is mostly the comic relief that pretty much moves things along from one a two point tragedy. He's a bit much from the get go. Not backing down from anyone even though he knows he's out manned and muscled in every situation. The guts he emitted made his character interesting, nothing else.   Then we have the character that let's say is about 65% of the reason why I really wanted to watch this movie. Sofia Boutella. She playce a character named Nice. Everyone who is a guest in the hotel Artemis is assigned a room each room is named after beautiful places around the world like Nice, Acapulco, Waikiki, etc.

We later learn that Nice and Waikiki have a little bit of a pass.  Obviously there was a love connection there but it didn't work out because she believes he's held back from his full potential just because he's always  looking out for his little brother.

every bit of this story was was a good adventure it was a nice time and I enjoyed it a lot. I found myself rooting for these these anti-heroes, these bad guys and just trying to figure out how they were going to get out of this bad situation. Jeff Goldblum brought his A Game the way only Jeff Goldblum can. it felt like watching his character from the Fly if the fly became a kingpin of criminals. 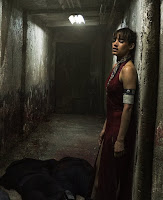 Overall this is a great movie you'll enjoy it. 95% of the reason why I really wanted to see it was because sofia boutella and she does not disappoint. either every. It was it was almost like watching her character from Kingsman before she lost her leg.

Will there or should there be a sequel? I hope so I think this movie deserves it.  if not it's a good standalone but out of that let me know what you guys think? Until next time Consumers, Peace.

Are Comedy Spoofs trying to hard to box with Gods?

We have the 1980s classic Airplane, the quintessential spoof movie you have, 2000s Scary Movie, you have Spaceballs, Hot Shots, Young Frankenstein, there's Robin Hood men in Tights, Austin Powers that's a spoof of the James Bond movies and Blazing Saddles this goes on and on and on and on the Naked Gun even in recent years you have a Hot Fuzz and Walk Hard.

Now those I'm going to put in the category even though as of late you know that they weren't really all that great. Black Dynamite that's also another good one now oh oh oh the Galaxy Quest perfect one is well that was a great spoof movie of Star Wars more Star Trek fandom. Over the years you've seen other attempts, now to me, I feel like as far as a franchise scale movie I think that  ever since the Wayans brothers left that franchise (Scary Movie) that's what started the downward spiral of Spoofs.

Listed as the worst spoof movies so you got off the bat number one as Meet the Spartans,m you have the Disaster Movie, Epic movie, Vampires Suck, Dance Flick with Damon Wayans Jr is in that one. Scary movie 3 deserves it and these are the order, scary movie four, scary movie 5 yes that's right. Date Movie, they decided to get desperate after a while. Haunted House, Superhero movie.

I want you to remember that one because that's gonna go into a point when I'm about to make.

The movies weren't all great back then but the majority are very good than bad. Here is my theory on why a lot of these spoof movies have been terrible as of late. Now listen to or let the movies of the classic movies from the past were aware versus what they are today. When you go back to the best movie list you have movies like Robin Hood men in tights obviously making fun of like Robin Hood Prince of Thieves. Things like that I know Robin Hood had to look at the budget.

Look at the budget, you're not going to spend as much money on a spoof movie you'd be stupid to do so but look what they're aiming at back in the day. That airplane wherever they were spoofing and then Robin Hood whatever they were spoofing the budgets were closer. the scenery, the paying of the actors and getting the special effects or the practical effects out of the way you weren't really going above and beyond you could pull it off and it doesn't have to be 100%. Look at Spaceballs, they were able to do it they in a time where they could use almost the same amount of money to pull off similar special effects to make the movie not of course it's still a spoof movie.

Spoofing a movie with a 200 million dollars plus budget like a James Cameron special effects film. To make that movie look so good was going to be just on point, any spoof of that you're probably going to be using what five to ten million dollars to get the makeup and all that stuff, pay your actors and then what you're only going to be making fun of them or whether in a couple of scenes it's going to look like crap so if you're not depending on good writing or good comedy and everything then you're special effects is suffering. You're not gonna come anywhere near that budget this is my theory and why comedy spoof movies are failing; they're aiming for targets that has already moved too far ahead in effects and budget.

A Blumhouse film keeps a low budget you strike the target or come closer to the target than you were trying to make fun of an Avatar or an Iron Man or an adventures superhero movie like that did. Its like what CM Punk said to the Rock,  "your arms are just too short to box with God".

why are you attempting this kind of a fight? the target has moved too far ahead, it's too far down the road, it's too high above you why try spoofing movies not in the same playing field anymore at least back in the eighties in the nineties budget-wise they were close.

I'm sorry I'm doing that wrong yes I guess that's like a 6 million little difference right there oh my goodness so evening when you combined Empire and Jedi you see where I'm going with this. it's still what one movie was still kind of in striking distance financially.

So that's my opinion on why these spoof movies have suffered. what do you think? am i way off base? Am I totally forgetting about the editing, the lighting, the producers, the directors the actors. Will there ever be a day when these spoof movies will ever come back again? let me know what you guys think hit the comments, put it in the box, hit the like button. thanks for taking the time to listen to me rant about this I want to know what you guys think about this as well.