Here are some of the things I took away from and covered about the Captain Marvel Film. 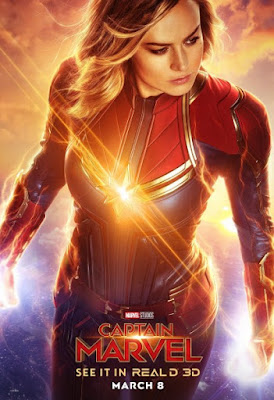 CGI was great in most parts. Bad in the space fights. I felt that the reason we got the Captain Marvel flying in space shooting down ships was because it looked great on a small screen but seeing in IMAX it was one of the moments where the CGI was not up to par.
Nostalgia was great.
Listening to a bunch of hits from the 90's brought me back to my Total Request Live days. Some songs were not a good fit but others were perfect.
Wasn't a woman power movie like Wonder Woman, though because WW did it first Captain Marvel did not have to play that up. Wonder Woman is an amazon so her calling out sexism made more sense. I would have rolled my eyes if Captain Marvel would have beat up a guy and then say, "And you just got beat by a girl". It worked for Wonder Woman but the impact of marvel's first female lead movie falls a little flat to DC only because we're not worried about having a great female lead superhero now thanks to Wonder Woman so it's good that they didn't play up to the woman card at all.

This felt like a paint by numbers Marvel film, which worked but there were so many scenes where I was like, this feels like a Thor moment, that feels like Ironman, and this feels like a Captain America. There were a lot of killer moments that were all its own but too many that felt too much like the formula, if that makes sense.

In my opinion, better than Ironman 2 & 3, Thor 2, Antman 2, Doctor Strange and tied with Antman, thor 3, avengers 2. The rest it falls short of. I give this movie a you have to check it out because there are a few movies where I tell myself. I've got to go back and see it again right out of the door as I'm headed to my car and I definitely said this to myself as I left. This movie is exciting enough to watch multiple times. It charges you up for the Endgame. Despite my few nitpick I rank this film high. I'm more excited to see what Larson can do amongst Earth's Mightiest Heroes. I'm curious to see how she'll react to Captain America and Ironman. This movie poked fun at a lot of things from the past that we take for granted today. Like high speed internet, Blockbuster Video and two way pagers.
Speaking of which, I'm hoping for a moment in Endgame where Brie Larson (Danvers) looks around Earth and asks, where did all the Blockbusters go and see if anyone blames it on the snap.
If you want to watch the full version of this review watch it on YouTube.