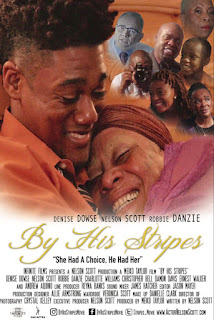 A short film written by Nelson Scott and directed by Meiko Tayler called By His Stripes. A tale of a young man's ability to face the mortality of his mother through his love and faith. The thing that I was first aware of just a few minutes into it was the connection between mother and son. I took a lot from this, it reminded me of the connection I have with my grandmother. The strength in faith in the church and the way the characters played by Denise Dowse and Nelson Scott was believable to the point where I could feel a familial bond. The direction of the story steers the viewer to deal with the realisation that we all must leave the world some day. How we choose to go can be up to us. Will you go kicking and screaming, in denial or with laughter and love? These are the things, when there are so few, within our control. This message of how we choose to heal was exceptional well crafted. This short film made me think of mercy and grace repeatedly until the very end.

There is a lot of talent in Scotts writing, singling, acting and energy. More than just belief, I know for a fact this will be a career to pay attention to.

Want to know more of the films creator see links below.