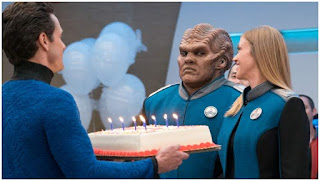 The story starts off with a planet that has primitive technology has no it was supposed to be 1995 or. And it came from a simple first contact episode 2 a more backwards thinking civilization then some of the other planets and I'm including that planet that voted on life and death scenarios like American idol.

to imprison People based on when they were born was not entertaining at all. And with people hating the Orville and not enough people warming up to it quick enough for it to continue forward this show cannot afford a miscalculation and writing like this. This show has done better and can be better. Right now this is considered the weakest and worst episode I've seen.

The best part of it was introducing the new head of security character but that was pretty much it everything else could have been left behind. I don't know if this was supposed to be a lesson about the content of character near Martin Luther King Day but that was barely caught if that was even the point. And I'm feeling as though I'm grasping at straws to make it connect.

I just did not see the logic in the story telling. I mean come on you're smart enough to want to reach out but dumb enough to not think aliens would think differently? I mean what was the point? If the natives would have been hostile from the get go or it would have been a trap for a higher purpose it would have worked but it was a step backwards.

Let's just say that the people of this planet that was introduced to the Orville were lucky they did not meet the Krill first or me because I would have wiped them out. Leave no Man behind. that's the model that they would have been introduced to messing around with me. I look forward to seeing the next episode and hopefully getting back on track
at January 25, 2019 No comments:
Email ThisBlogThis!Share to TwitterShare to FacebookShare to Pinterest
Labels: comedy, Fox, seth macfarlane, space, star trek, the Orville
Newer Posts Older Posts Home
Subscribe to: Posts (Atom)
Follow @t3medias