The Revolution was not televised but streamed online at the Edwards Greenway Theater in Houston Texas. The team came together and watched the Captain America Civil War movie and had an amazing time. We get together, unwind with a few drinks, and we chow downed on some of the best burgers and fries in the city. We saw one of the last showings of the night, getting in line three hours early to become the front runners. It was great to have the whole party there for the first time in a long time. Usually we get together online play a few games call it a night. Getting older having kids makes things a little difficult as far as having a fun guys night out with your closest friends. But I'm just a the all the stars aligned. After catching up in line for about an hour and a half we were finally allowed in got the best seats right in the middle. Then you all settled in and waited for the movie to begin.

Spoilers!
From the very beginning you could tell this was another Russo Brothers masterpiece. The first mission to take down crossbones before he captured a biological weapon in Nigeria was a pure adrenaline rush. Captain, falcon, and Scarlet Witch work a unique combination. Scene crossbones go toe-to-toe with Captain America with his enhancer was brilliantly choreographed period after he set Captain America up by playing on his emotions with his old friend Bucky he triggers a suicide bomb that was immediately suppressed by Scarlet Witch's Powers drawn away to save Captain America but unfortunately killed residents in the area in the country from the country of Wauconda. 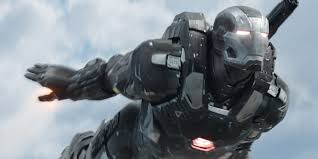 Looking deeper into the issue of enhance people acting is vigilante the United Nations decides to pass an act that would put the Avengers under the control of the United Nations only able to do missions approved by the UN. Tony Stark, Vision, Black Widow and on the other side Captain America, Falcon Scarlet Witch. During the hearing to deal with the Avengers there is a car bombing of the building that kills the King of Wauconda. The only suspect is Bucky. Now that he's public enemy number one that, the Avengers, and all major world leaders are hunting him down. With Captain America the being the only one not buying it 100% that Bucky is all bad or is even guilty of this crime due to the fact that he may have been under mind control again. His mission is to bring Bucky in alive to help him. During the chase their are plenty of in-your-face epic fights. Bucky holding back not to kill the local S.W.A.T. and Captain trying to keep them from killing his friend and bring Bucky in alive.
From out of nowhere The Black Panther enter to fight to avenge his fathers death. His fighting style and cat like abilities are remarkably executed on the big screen. More than once said "wow" out loud.  Bucky tries to hold his own but is out matched by the King of Wauconda, as is Captain America. Ironman, after the guilt of his past mistakes finally catches up to him. Does everything in his power to bring Captain his team in since they have now become criminals. Warmachine is critically wounded and now the fight become more personal. As the fighting continues and secrets revealed it is apparent that we will not see a super powered villain. That we are dealing with a crafty person who is able to infiltrate the Avengers from within and destroy the team from the inside. This makes it the second time ever that the main villain of a Marvel movies antagonist is just normal people trying to infiltrate the heroes from where they live. The first being Winter Solder. its no wonder these two movies are not being called the best of all Marvel films in some peoples opinions. 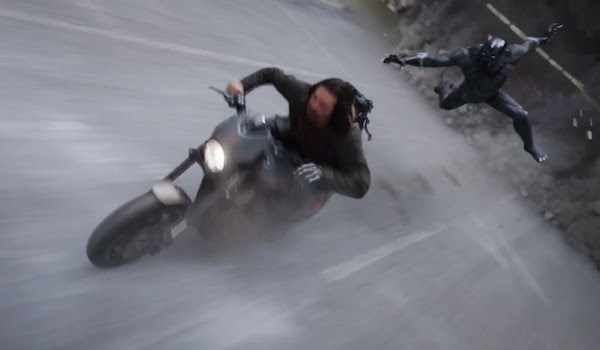 Prepare For Geek+ Mode
Tony Stark seeks outside help from Queens. We seen a kid carrying a dvd player heading to his apartment home. Once he walks in the door he is surprised to seen Mr. Stark in the living room talking to his Aunt. Hot Aunt May is now in the building. Peter Parker is totally shocked to see Ironman in his home. Tony tells them about a scholarship that he won and winks for Peter to play along so they can talk in private. From the moment Tom Holland began to speak, all I could here was "The Real Peter Parker". OMG, this kid won me over just by saying "Hey Aunt May!" In private it was revealed that Tony had been watching Peter from video of him caught on YouTube saving people and stopping criminals. Peter tries to deny them, calling them a hokes till Tony find his secret stash revealing his Spider suit. Tony calling it a Onesy was the funniest line. Tony tells Peter why he feels he could be of help. Peter agrees and joins Team Ironman.

I will leave the epic Airport fight alone. You'll need to go in and experience that for yourself.

Our villain Baron Zemo, lost his family in the second Avengers movie. His ability to find the winter soldier and reactivate his dark side and then subble upon a darker secret that (SPOILER) Bucky killed his parents. At this point of the movie the Avengers were getting back on the same page, after all the politics and arguing. Ironman revealed that he use to hate Captain America at a young age because his father wouldn't stop talking about him. It all made so much since, his early distain. its true, the past returns each and everytime during the third movie. By the end of the film the avengers are spintered but its doesn't seem that all is lost. Team Captain is now in the shadows. Will we have a Secret Avengers opening up for Infinity Wars part one and see the Avengers come together as a whole for part two? I can't wait to find out.

More will be talk about on our YouTube channel www.youtube.com/t3mediasonline
become a subsriber, get free tickets to movies and enter to win a gaming console

check out a cool blog: Did Tony Star Spy On Peter Parer?

The winter soldier will most likely help out Black Panther in his movie, since he puts himself in criostasis sleep in Waucanda. Captain America tells the new king that if the wrong people find out he's there they will come for him. The Black Panther simply says let them try.

Spiderman gets a new webshooter that gives a digital hologram showing his trademark symbol inside of what looks like a hundred of icons of different offensive webbing abilities, like electric webs. This is so Ultimate Spider-man, I pray Samuel Jackson is in Homecoming.
at May 07, 2016 No comments:
Email ThisBlogThis!Share to TwitterShare to FacebookShare to Pinterest
Labels: Black Panther, Captain America, Civil War, comic book, Ironman, Marvel, spider-man, Spoilers
Newer Posts Older Posts Home
Subscribe to: Posts (Atom)
Follow @t3medias