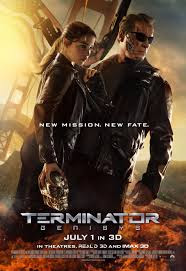 Finally got a chance to see Terminator Genisys.

I loved the explosions. I also got a kick out of J.K. Simmons (I said Rollins in the video). He plays Detective O'Brian, his presence was a little too convenient at times. He believes in everything because of what he witnessed in the fight between Reese and a T-1000. His character was entertaining through out but a little too forced in order to prolong the plot.

You have Jai Courtney who played Kyle Reese who goes back in time to save Sarah Conor but now she's been raised by a Terminator since she was nine and now does't need protecting. This was meant to have a Days of Future Past effect to erase the crap from the bad movies in the franchise. This has a unproductive effect by erasing the cool things. Skynet is no longer just a military made weapon that becomes aware. Its now an app that I guess makes sense for today but it being military was a cool thing. Now Skynet has turned into Facebook on crack.

The other problems with this movie was the fact that you had cool effects and watch things blow up to having to turn your brain on and have Schwarzenegger turn into Professor Terminator and try to explain what they've changed and how this now changes everything. It was very confusing at time and off rhytm. The hardcore fans will rip apart the logic in this movie. Since John Carter is now being conceived later in the future and not the 80's.

Having John Connor who was played by Jason Clarke become a new terminator and try to prevent his own birth was just crazy junk logic. Even for syfy.

The fact that Schwarzeneggar is now upgraded to a T-1000 makes sense since the villains are harder to kill. This was one thing I loved. The action scenes were great, the effects were awesome. But having to turn my brain on after each fight to be taught a lesson was too much for my primitive brain to process every 15 minutes.

Seeing that John Connor was turned into a robot coming back to kill his parents was more confusing since the term "No Fate but What We Make" was twisted to mean, I don't have to be born to exist. Just weird. Fix it!!!

It was worth the look but not better than 1 or 2 but way better than part 3. I'll have to see Salvation again to see if its better than that. I'm not happy with the new love dynamic for Reese and Sarah, his death and sacrifice was a huge necessity for the development of Sarah and her son. I liked Clark as Sarah Connor. She was what made this movie work as did Arnold.

Check out the new video review of the Terminator Genisys movie that I've done with further explains how I reacted to this film. Should it continue? Only time and the profit will tell.