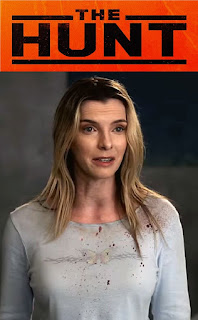 Twelve strangers wake up in a clearing. They don’t know where they are, or how they got there. They don't know they've been chosen… for a very specific purpose … The Hunt.
The reasons why I'm excited about this film:Hillary Swank and Betty Gilpin. The latter a tad bit more than the former. I'm would have been surprised at that admittedly two years ago but today is the new reality. I've always been a fan of Hilary Swank's work. two time Oscar winner and over all bad ass. I think Million Dollar Baby is my favorite performance from her. When ever i see her on the roster I know the project will have an A Lister that brings her A game to the table. From the trailer I can see that Swank is either the top dog (power that be) in charge of a sick organization who likes to kidnap and hunt people or is a corporate middleman that may be apart of something much bigger on a more global evil scale. Either way, she's a boss.

Paring her up against Betty Gilpin would not have been my cup a tea but ever since GLOW on Netflix Gilpin has become the one to watch out for. I have to confess that my first time seeing her in anything was in Nurse Jackie and her character did not land well with me. I couldn't tell if it was the writing, her performance, direction or a combination but something did not sit right. I then became a believer when I took a chance on the GLOW series and she blew my mind. I didn't realize that I was an official fan until I saw her on this trailer. I instantly recognized her, I immediately took her as a plausible hero/lead and I am genuinely curious how well she handles going toe to toe with The Swank.

With the combination of a very exciting cast and the track record of Blumhouse, I'm extremely excited about this one. If done right it can be the next franchise horror film to raise the stakes of shock horror. The premise to me feels like the purge done with a tad more realism. Keeping the murders hidden and made for sport to me feels like can happen and that makes it more scarier to me.

I expect a lot of twists and am hopeful for a surprise ending. The cast is amazing and the trailer makes me feel like this is more of a roller coaster right through a slaughter house. My kind of ride.

Synopsis:
In the shadow of a dark internet conspiracy theory, a group of globalist elites gathers for the very first time at a remote Manor House to hunt humans for sport. But the elites’ master plan is about to be derailed because one of the hunted, Crystal (Betty Gilpin, GLOW), knows The Hunters’ game better than they do. She turns the tables on the killers, picking them off, one by one, as she makes her way toward the mysterious woman (two-time Oscar® winner Hilary Swank) at the center of it all.
From Jason Blum, the producer of Get Out and The Purge series, and Damon Lindelof, co-creator of the TV series The Leftovers and Lost, comes a new mysterious social thriller.  The Hunt is written by Lindelof and his fellow The Leftovers’ collaborator Nick Cuse and is directed by Craig Zobel (Z for Zachariah, The Leftovers). Blum produces for his Blumhouse Productions alongside Lindelof. The film is executive produced by Zobel, Cuse and Steven R. Molen.

T3Medias: Fans sharing entertaining news, honest reviews, the latest in movies, tv, trailers and more by Talking Through The Media's.