Proof Critics Are Bias For Marvel Over DC Movies? 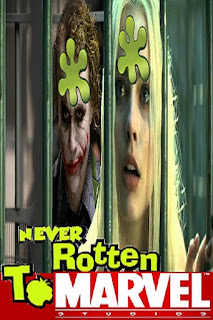 You've seen it and hated them. You've seen it and loved them. Movies have had their ups and downs. Usually we give them a fair shake. Today we're so ready for war, we're ready to defend a genre or particular cinematic universe from harsh criticism before confirming if we agree with the assessment.

We're rooting for a films success but attach people who have a bad reaction to it. Its like telling a person who is sewing a restaurant for food poisoning, saying they don't know what their talking about and the victim is bias for other food places. This before the angry party has even tried the food or the restaurant themselves. It just makes no sense.

Yes critics are bias. The definition is rooted in the opinion of the individual. Your reaction or opinion to a movie is all your own, it belongs to no one else. So by the term, a opinion is always bias. But what the fanboys are saying is that the bias isn't for their own opinion its a preemptive bias that is prejudice against the competition. DC comics/Warner Brothers cinematic universe has its ups and downs. Since the Man of Steel to Batman VS Superman. Suicide Squad was to be the first complete hit. But when mix reviews came in from advance screenings and Rotten Tomatoes gives it an extremely bad score. Fanboys petition the site be such down.

This argument will go nowhere. If DC fanboys want to call bias by pointing a light to their own, this argument will go nowhere. Because I'm sure those guys are going to see Marvel films. I believe Marvel fanboys are seeing the DC films. Its the regular viewer they should be worried about. A small number may be influenced by bad reviews but the majority will more likely be

Michael Steel said it best just a moment ago on MSNBC regarding the election polls but I think it fits. Its the focus on the crowd in front of you (fellow DC fanboys) instead of the crowd we should be watching (regular movie goers) with the crowd that's in front of you. We feel that a movie is great because we loved it along side of our pocket of like minded fellow fanboy friends and we think that represents the whole world. It doesn't. Majority of viewers aren't reading comic books and learning about the Squad for the first time. This was the same risk Marvel had with the Guardians.

What fans are upset about is that Marvel has had time to build trust. Movies that should have been a failure, Ironman, Antman, Guardians, Captain America and Thor, were hits. and the ones that were not so well received, Ironman 2 & Thor 2 still gives Marvel a history of success over "failure". DC is just establishing their universe and both films were met with rocky starts. Not because the film was bad, that is a subjective opinion person-to-person. The problem is that Marvel had the benifit of lower expectations from fans and films like The Dark Knight (Warners) and the Avengers raising fans standards and expectations. Now that DC is starting out after those expectations have been raised they're being looked at to meet the criteria.

The uproar would imply that Marvel film makers are not equally being criticized with the same expectations. Kevin Fiege helped create the standard, so he has learned a great understanding of what the quality of his films should meet. And he does it more often than not. DC has not done this quite as well in my opinion. Though I liked all the movies so far, little things like Superman killed and the Martha/Editing stuff was uproars that DC fanboys complained about more than Marvel, in my opinion. Because they thought the films weren't being handled correctly. But now we're attacking critics. You can't call yourself a fan who's only giving constructive criticism and say that Critics are bias. Rotten Tomatoes algorithm doesn't measure constructive criticism. Okay, relax guys. What we get is what we get. Enjoy the film, if you like it spread the word. Sometimes the critics are judging on all aspects that we're not looking at. Like Lighting and editing. Sometimes us fans just want to see something explode and when it does we give it a 10 out of 10.

We must do and expect better of ourselves.

Let me know what you think, become a subscriber to our channel and join the conversation.

You can win tickets to see Suicide Squad when we reach our 700th subscriber.