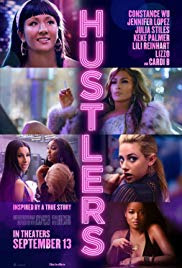 The hustlers movie review. Now I just I've seen the movie while ago absorbing exactly what took part in and really getting an understanding of what this movie is the attempts behind it. Where it succeeded, where it failed and things like that. Working as a stripper to make ends meet, Destiny's life changes forever when she becomes friends with Ramona -- the club's top money earner. Ramona soon shows Destiny how to finagle her way around the wealthy Wall street clientele who frequent the club. But when the 2008 economic collapse cuts into their profits, the gals and two other dancers devise a daring scheme to take their lives back. So basically, you know the financial crisis hits and we go into a situation where these women decide to take matters in their own hand. I'm a real estate broker, I like movies that tie into these things. I'm into two stocks, I'm into real estate and that's my thing so movies. It was a Boiler Room, Wall Street, the wolf of Wall Street, the big short and Molly's game for instance. I love those movies like that tie in around Wall Street and everything that led into the housing crisis; before and after I don't know why fascinates me I love those stories.

I was hoping that the hustles would be another one of those installments I'm always looking for another one to tie in. I like movies like that and if you guys have any suggestions you have any recommendations you want me to take a look at. Hustlers, even though it was directly tied into it in a way from a certain point of view, it does not hold up to the caliber like of a big short and whatnot and here's why. There's the things that I liked about it Constance Wu of course she crushed it. Jennifer Lopez this is one of the best roles that I've seen Lopez in. Their chemistry get was good I love the the

back-and-forth with them. How they were as mothers to their their kids. At the end of the day
people are only looking out for themselves. Their in an environment where backstabbers are all around you, people will cut your throat. They'll smile in your face and they'll cut your throat. Destiny just did not know what to call it, how to call it and I love that about this. The fact that Jennifer Lopez could be smiling in your face and you're thinking to yourself ‘are you about to betray betray me?’ any rational person would and should in that environment. I screwed you over to protect myself, I got people to think about. You look at that like at any moment any person would be justified to blow up and then you have these moments where it's like I understand. The people that they're doing this to now that was where I felt the movie was lacking. If there was more of a conversations of what these men that they were robbing did on a day-to-day. Like the real messed up ones I mean you just had people you pretty much had them portrayed as douchebags. The movie wasn't really trying to make them seem like the heroes because they really weren't doing a great job of making the people that they were robbing seem like villains so it was almost like two pairs of jerks clashing and maybe that was the point.

You have Cardi B which makes sense you know you got Cardi B herself who was a stripper I felt that they dropped the ball on that one because if she's one of the main actresses if there was any character I could have seen like she could play Kiki Palmer's character Mercedes. maybe that would have been good for Cardi B then when I saw what was needed for that character I was like man maybe Cardi B not ready acting wise for that for that type of a role maybe Annabelle maybe, maybe not. Cardi B has so much charisma and has a different type of energy having her where she was was fine but then Lizzo’s character I mean she even played the flute. John Campea talks about you get the actor that can serve the movie the movies not supposed to serve the actress or the actor. Now having her in the movie in the cameo is fine and doing what she did was fine but the second that flute came out which I like that about I like about Liz oh and the fact that she's a flutist and plays the flute and she's a good rapper and all that stuff is awesome but throwing that into the film was too much fan service man it didn't do anything for the movie it took me out of it completely. I didn't feel like that story needed to be two hours long it just it was 30 too long.