F Is For Family Season 3 Review

This is Christopher Fagan creator of T3medias you can become a subscriber to our YouTube channel youtube.com/t3mediasonline for reviews like this and more reaction videos.
I recently became aware of the genius of Bill Burr a year or two ago. By chance I came across his comedy special on Netflix then had to binge all of his stand-up that Netflix had available. I was surprised that I found out through those specials that he was one of the first comedians to establish a deal with Netflix. I then became aware of his weekly podcast and now I'm addicted to hearing it faithfully every week. before all this the only exposure I've had to Bill Burr was the few skits he did with Dave Chappelle on the Chappelle show. I just thought he was a regular actor that was close to chappell. Now I know that he is a genius comedian who just happens to know David Chappelle.

“F is for Family” is an instant classic and it was a pleasure talking to @billburr and @mikepriceinla about it.https://t.co/DBqubbuQKd
— Matthew Rozsa (@MatthewRozsa) December 2, 2018

Once I figure it out that the cartoon on Netflix f is for family was created by bill burr I then had to take in every available episode as fast as I could because I knew I would not be disappointed. Season 2 was already available before I understood what I was missing out on so I had to make sure that I was there the minute season 3 was up and running. To me this was the best season because it drove into a subject matter that's very hard to execute. It's hard enough to feel like the people in your life that are important to you or not paying attention to you or what's important to you. It's even worse when they're so wrapped up in doing what's right for the family that they cannot see the harm it's causing to the family. This was a perfect metaphor for the forest for the trees. 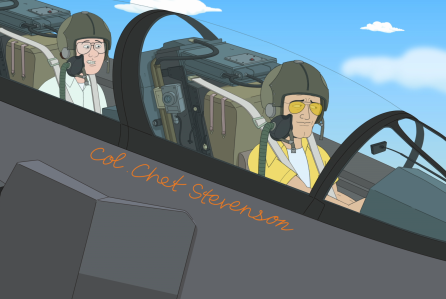 The funniest things going on we're all the things happening around the family and how the family was oblivious to it or reacting to it at the same time. Especially by his new crazy neighbor voiced by Executive producer Vine Vaughn. The idea that Bill's former bully has become a weird sort of protector. The racism that's going on at the airport where Frank works has motivated people to better themselves and make change that will affect everything moving for.


But overall the threats of getting put through a wall, my name is Jimmy Fitzsimmons and the new catchphrase “you know what”, will always remain instant classics that will insure hopefully this show last for a long time. Characters that were just seen as background decoration are now stepping in the light and becoming main character level. This was the best season for character development overall and I cannot wait till season 4. Congratulations Bill Burr on a awesome season. don't forget to check out F is for family available on Netflix. If you are a fan of F is for family you will also like the Monday morning podcast available on SoundCloud. Go to billburr.com for more details.
at December 03, 2018 No comments:
Email ThisBlogThis!Share to TwitterShare to FacebookShare to Pinterest
Labels: Bill Burr, cartoons, comedy, Netflix Review, podcast
Newer Posts Older Posts Home
Subscribe to: Posts (Atom)
Follow @t3medias