Rumors of Marvel's Iron Fist on Netflix Are Not True 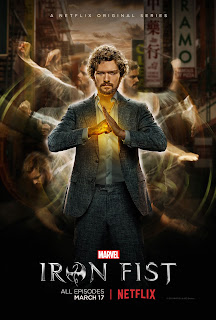 All that I was hearing about this being the poorest reviewed Netflix/Marvel story just lowered my expectations. I liked Luke Cage but liked it less than the other two shows on the Marvel lineup so my expectations were already lowered. I'm more geared up for The Defenders but I'm being patient because I know I want to know if the chemistry will fit. So here I am. At home, its two in the morning Central Standard Time and I'm loading up for Iron Fist on my Galaxy 7. Half way through I'm very in to what I'm seeing. I love the way Daniel Rand (Finn Jones) just shows up, like "its all good. I've been missing for fifteen years but hey, I'm back now give me 51% ownership of a multi-billion dollar company. This shouldn't take long, right?"

From that moment I felt that every fight that went his way was deserved. Not because I want to see him fight or I felt that he wasn't in the right. But what do you think a bunch of Billionairs are going to do when you come in their place of busness and start planting your flag on everything of value. Especially without any damn shoes on your feet. We could have simply gone into the story of him coming back to power/ownership of his parents company with the first two episodes. I love that it stretched. It shouldn't and wouldn't be that easy. People hate change, especially if that change is wrapped in a miracle.

The two main obsticals in Danny's way are his former childhood friends Joy and Ward Meachum, played by Jessica Stroup and Tom Pelphrey. Jessica from the get go seemed to be reasonably in defence or denial that a friend thought dead for fifteen years from a plane crash would come back. Her responses seemed fitting. From jump street you could see that Ward was a jackass too the max. I felt that he was hiding something from the second he walked on scene with that Don Junior slick back hair. Why do corporate douchebags rock that look? Well, maybe its just a liberal stereotype. I mean, Tom didn't write the character.

For the most part, Finn's portral as Danny/Iron Fist is palpable from what I know of the comic character and what I've seen of him on cartoon series. The gentleness and ability to spit some fables is on point. The thing I'm most involved with is his anger issues. He's having a clear internal battle. His demons are all around him. This part of the story is very interesting. Makes his character development more mysterious. The nicer he is the more i feel like he could snap. Was this always apart of the characters past. Marvel has sparked my couriousity.

Meeting his friend Wiig, a local New York Dojo master teaching troubled kids in the area martial arts to escape abuse from home at first had me worried she'd be too much like Elecktra. Now that I see that she's a down to Earth, just trying to get by and make a difference kind of person, my fears are not a factor. With Rosaro Dawson (Claire Temple) as the glue that connects the shows, Claire-Ann Moss making her legal apearance as Danny's needed lawyer (I was hoping for Daredevil, but okay), Kristen Ritter and Rachal Taylor, I'd love to see Elecktra and these Females of Fury have a side mission on Defenders and get an episode where they all are the Heroes needed to save the day.

David Wenham plays the father of Ward and Joy, he has a mysterious interest with Danny and his mission to destroy The Hand. The same group giving Daredevil so much greef. It seems that if Iron Fist isn't successful in finally stopping The Hand once and for all we're definitly knowing the plot to the Defenders storyline. Lets hope this wraps that up.

So far I'm good with Iron Fist. I believe the rumors of the negativity on this was predetermined. Most were probably just trolls or just tired of waiting for Defenders to kick off. So far I'm rating this a 3 out of 5 because I like corporate dramas, kung fu and comic books. This give me that. its not better than Daredevil or Jessica Jones, but I'm finding the story more intertaining than Cage. But I give Cage the A for the message it was giving and the best villians.

No more to report. I'll give my complete review on YouTube. See links below.