GLOW Is The New Black

Coming to the ring, The Gorgeous Ladies of Wrestling. Will this new ensemble of strong, crazy, motivated and diverse group of women be the ones to bring down the reigning, defending Netflix champions of the world, Orange Is The New Black?

We've got a live one here. I'm a huge OITNB fan but I've always been a Wrestling fanatic, not only that, I'm an 80's baby. So when it comes to the house that Big Bad Mamma built and a series based on its creation, I was hoping that it would be something special. I'm not disappointed at all. Not only will it fill the void that would be created by the completion of the Orange run but there is something special about the wrestling fan base. You treat them with respect and show respect to the culture then you'll create a base of loyalty that is unmatched. 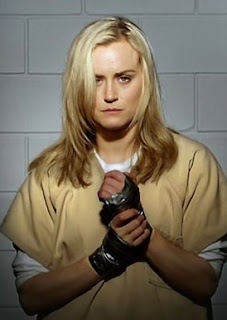 Glow on Netflix has delivered. After the cancellation of such shows as The Get Down and Girl Boss, two that I had high hopes for but were cancelled. With the delivery of Glow we have a fresh story that breaks free the spirit of what OITNB has also captured and ventures out free to explore so many possibilities. Crazy Eyes vs Wolf, Ruth vs Piper or Dawn and Stacey vs The Methheads. There are a lot of similarities but despite the inevitable comparisons, this story is in a class of its own. The things that makes both stories easily compared doesn't mean that we're dealing with a cheap knock off but a worthy opponent. I'm bias, like I said, I'm a wrestling fan so if I had to choose, I'd say Glow is the better story line, but I've already had so many ups and downs with the girls in the prison that I've got to ride till the wheels fall off.

I felt that this should have been the last season of Orange but I'm going to predict that the next will be the last and if Glow fails to hold the attention of the same number of loyal followers and bring new subscribers to the table then long live the chief and Orange will keep going till a new champion is found. Let them fight, its just like Marvel VS DCEU, there is no real fight, both companies want the other to do well. If the genre is doing well both companies will succeed. In this case, if fans of Orange love Glow, they'll want both to bring in more, but if Glow over takes then Orange will have had a solid respectable and incredible run. If Glow fails to make the transition then it will go in the way of the girl boss and get down to cancellation. 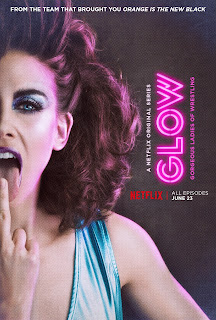 at June 25, 2017
Email ThisBlogThis!Share to TwitterShare to FacebookShare to Pinterest
Labels: 5 out of 5, 80's, binge, comedy, drama, Girlboss, Glow, gorgeous ladies of wrestling, netflix, orange is the new black, stream, The Get Down, Womens Championship, Wrestler, WWE, WWF