Morgan Movie A Must See 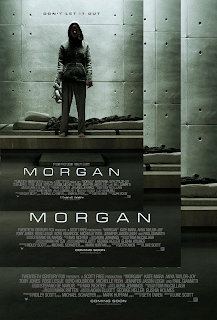 Prepare yourself for the Morgan Movie Review!

The performances by the cast did some amazing work. This was a well cast movie. I was pretty shocked. I never saw Kate Mara as an action type, I've seen Fantastic Four, now lets forget about that. If she's trying to say she should have been Black Widow in the Marvel movies, this gave us a good argument. This movie followed the same plot points as Species and Splice. You have your science lab in a remote place then your character played by Mara visits. she seems like an HR rep but it shows she's more than that.

Morgan is an enhanced human, quarantined in a similar landscape like the film Ex Machana. This was a great thriller that makes you uncomfortable for the Morgan girl, makes you feel sorry for her. Then things happen to make you say, "What is this thing?" As weird things start to happen. Any time you have scientist playing God, there's no way people will survive. Morgan is stronger smarter, almost a genius. Yet, she's still childish, she looks like a 17-20 year old but she throws tantrums like a 5 year old. A bad combination as always.

This movie makes you see Mara in a whole new light.

There's more to be seen in my spoilers review of this movie.

See the video on our site. Comment. Will you see this movie? Why isn't it getting the buzz as I feel it should. I already liked it more than Splice. Not quite Species, but I see franchise, if this movie makes a certain amount of money. Kate Mara can be something incredible. If a sequel comes from this, they'll defiantly name it from Mara's character. Why, you ask? See the damn movie.